EC Wear was opened in 2008 by Marija Mikolajczak, an EC’ing work-at-home-mom, to sell a full range of clothing for Elimination Communication: split crotch pants, training pants, real shirts (not “onesies”), elastic-waist pants, and other baby and toddler clothing that would make diaper changes and potty visits quick and easy.  Marija was an environmental and workers’ rights activist and a union organizer prior to becoming a mother, and her dedication to those concerns has shaped the commitment to sustainability practiced by EC Wear’s entire operations. 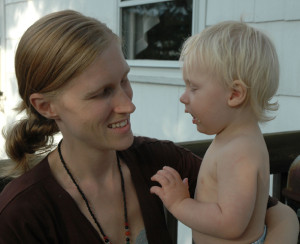 Before my son was born, I had spent over a decade fighting for worker’s rights as part of the anti-sweatshop and trade union movements so I wanted to buy clothing that was made by people who were paid fairly and treated fairly. I had a hard time finding any baby clothing that was not made in China or other countries with horrific human rights’ violations.

After my son was born, I realized that regular baby clothes, even the sweatshop-free or second-hand ones, were not what I really needed.  I had read about EC while pregnant but I was skeptical. It wasn’t until I noticed that he was crying when he needed to pee that I realized my baby was not as skeptical about the process as I was. So my husband and I started practicing Elimination Communication, and we were taking him to the potty frequently. I wanted some baby clothes that were easy to remove when I needed to take him to the bathroom or change a wet diaper, and quick to put back on so he wouldn’t get bored or frustrated with the process. The baby clothes I had were full of snaps and extra layers and usually required being removed entirely for access to remove a diaper.

Through online forums, I heard of moms putting a cloth diaper over split pants, but didn’t really understand how that would work. So I started experimenting by cutting up some of the clothes that we had, making split pants with a wide opening that a diaper could be taken on and off without removing the pants. I thought it was a lot easier to leave the pants on, and only remove the diaper when needed, like cowboy chaps.

I thought it was a lot easier to leave the pants on, and only remove the diaper when needed, like cowboy chaps.

I was really happy with these pants. I could tuck a prefold diaper inside or put a fitted diaper over the pants. During diaper-free time the chaps kept him warm and protected his knees when he was crawling. A lot of other moms were curious about the pants, especially when he was crawling and he had the split pants on under a colorful cloth diaper cover. 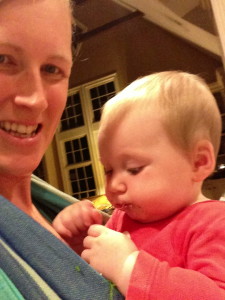 People kept telling me they loved the chaps and they encouraged me to start selling them. So, I talked with my mother and she agreed to sew the pants for me to sell. My mother’s name is Lil and the pants were little chaps, so we came up with the idea to call them “L’il Baby Chaps.” Clever, right? So, Mom started sewing and we started selling.

EC Wear was set up as an LLC and the website was launched in January 2008. In addition to the L’il Baby Chaps, I searched all the wholesale stores I could find that sold organic, fair-trade, or made-in-the-USA baby clothing that met my social justice criteria, to find any clothes that I considered practical for using with EC.  Then we added a few other products, including Diaper Belts, a matching diaper cover to wear over the L’il Baby Chaps, which later evolved into the rECtangle Covers.

It gradually became clear to me that I needed to shift focus onto designing and manufacturing.

Over the years, many of the products I was selling were discontinued because the small businesses making them closed down.  Practical clothing for EC was getting harder and harder to find. It gradually became clear to me that rather than simply being a centralized location selling convenient, sweatshop-free, EC-friendly clothes for my customers, I needed to shift focus to designing and manufacturing the products families were looking for to keep their babies clean, dry, and frustration-free during their diaper-free journey.

Being a full-time mom and a part-time business owner, squeezing time in between website maintenance, shipping out orders, bookkeeping and all the other things a small business owner does, it was a slow process learning about sourcing fabrics, finding a sewing contractor, understanding all safety regulations, acquiring all required licenses, and all the other boring aspects of running a manufacturing business. After a long search and severa false starts, In mid-2012, I found a wonderful sewing contractor local to me in New York City. I was excited to find a family-operated small sewing business that was willing to work with me on small production runs and provide excellent quality work. In 2013 and 2014 I gradually added two new products to my line of EC Wear clothing, the Re-Ewes Split Pants and the EC Wear Split Pants.

I practiced Elimination Communication with my son from the day he was born.  I had read a couple of books ahead of time but I was a little unsure whether I was going to be able to make it work. A long labor which didn’t go as we’d hoped left my husband and I feeling completely exhausted. So, for the first few days, while at the hospital we first cued our son 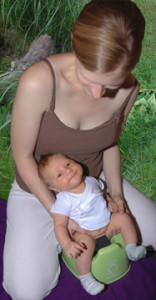 into his loosened diaper. When we returned to our home, as soon as he started to fuss, we took him into the bathroom, took his diaper off, made a cue sound, and almost fell over in surprise when he peed!

When my second child was born, there was no doubt we would practice EC again. She was born at home and we were much more relaxed about EC. For the first few days I didn’t even put a diaper on her, I just tucked a prefold diaper around her and gave her opportunities to use a potty. The second time went more smoothly because we weren’t worried about how to practice EC. To me this taught me a lot about how humans were meant to live in close communities and help each other out– by the time anyone became a parent, they already had a lot of experience with the babies and children of everyone else in their communities.

A few times I’ve even had the opportunity to potty other people’s babies, one of them was just a week old. Each time, I simply explained to the baby that I thought maybe they would like to pee, I held them in my arms facing outward, supported by my chest, over a place where they could go (e.g. over an already wet diaper, near a bush at a park) and both times the babies peed immediately! Their moms were bewildered but I believe that babies have this instinct and are ready for us to help them.  We just need to learn to trust in ourselves, our instincts, and the idea that we don’t need to purchase a lot of disposable products or pollute the planet to simply raise a baby.

Contact us for help choosing the right product for you.